SHINRA is a resource creation project started in the year 2017, aiming to structure the knowledge in Wikipedia.

SHINRA2020-ML is the first shared-task of text categorization in SHINRA project, tackling the problem of classifying 30 language Wikipedia entities in fine-grained categories. The task is conducted as one of the NTCIR-15 tasks.

The task is to classify 30 language Wikipedia entities into 219 categories defined in Extended Named Entity (ENE) (ver.8.0) (a four-layer ontology for names, time, and numbers) , using categorized Japanese Wikipedia pages and the interlanguage links to the corresponding pages in target languages. 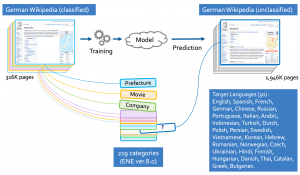 We will provide the training data for 30 languages, created by the categorized Japanese Wikipedia of 920K pages and Wikipedia language links for 30 languages. For example, out of 2,263K German Wikipedia pages, 275K pages have a language link from Japanese Wikipedia, which will potentially serve as a-bit-noisy training data for German. So, the task is “to classify the remaining 1,988K pages into 219 categories, based on the 275K categorized pages.” The same holds true for other 29 languages as shown in Data statistics.

Wikipedia consists of a large volume of entities (a.k.a. articles), which is a great resource of knowledge to be utilized in many NLP tasks. To maximize the use of such knowledge, resources created from Wikipedia need to be structured for inference, reasoning, or any other purposes in many NLP applications. The current structured knowledge bases, such as DBpedia, Wikidata, Freebase, YAGO, and Wikidata among others, are created mostly by bottom-up crowdsourcing, which lead to a significant amount of undesirable noises in the knowledge base. We believe that the structure of the knowledge should be defined top-down rather than bottom-up to create cleaner and more valuable knowledge bases. Instead of the existing, cumbersome Wikipedia categories, we should rely on a well-defined and fine-grained categories. Among a few definitions of fine-grained named entities, Extended Named Entity (ENE) is a well-defined name ontology, which has about 220 hierarchical categories and a set of attributes are defined for each category.

The final goal of SHINRA project is to structure the knowledge in Wikipedia including the attribute, but as a first step, we need to classify each Wikipedia entry into one of the ENE categories before extracting attribute values. The task of SHINRA2020-ML is to classify Wikipedia pages in 30 languages into ENE (ver.8.0) categories. We have classified major Japanese Wikipedia pages (920K pages) into ENE (ver.8.0) categories already. We can use language links to create the training data in 30 languages (i.e. 274K in German and so on). So the task is to categorize the remaining pages in 30 languages using the training data.

Statistics of Wikipedias in 31 languages